Rabbi Soloveitchik was born in Pruzhan, Poland, the son of Rabbi Moshe Soloveitchik zt’l, and grandson of Rabbi Chaim HaLevi zt’l. At the time, Rabbi Moshe was living with his father-in-law, Rabbi Eliyahu Feinstein zt’I, rabbi of Pruzhan and author of Teshuvot Halichot Eliyahu. Rabbi Yosef Dov studied with his father, whom he considered to be his foremost teacher, until the age of 23. In the final year of Rabbi Chaim’s life, he moved to Warsaw where his son, Rabbi Moshe, was living at the time. During that year, Rabbi Yosef Dov studied together with his vaunted grandfather. Several years later he began university studies in Berlin while continuing his immersion in Torah. In Berlin, he met Rabbi Chaim Heller zt’l, with whom he developed a close and lasting relationship. He also encountered Rabbi Menachem Mendel Schneerson zt’l who was later appointed the rebbe of Chabad.

During this period, Rabbi Yosef Dov made frequent visits to the city of Vilna where he became a favorite of Rabbi Chaim Ozer Grodzinski and other leading Lithuanian gaonim. In 1932, he moved to America and settled in Boston. He founded Yeshivat Rambam—the Maimonides School—and delivered weekly shiurim there for many years. In 1941, he succeeded his father, upon the latter’s passing, as rosh yeshiva at the Rabbi Isaac Elchanan Theological Seminary, commuting from Boston to New York each week. His shiurim in halakhah and aggadah, which reached to the ends of the Jewish world, made a profound impact on Torah learning in our times. They continued for decades until he was compelled to stop due to an illness which overtook him several years before his demise. In addition to the shiurim which he delivered at the yeshiva and in Boston, he delivered a shiur every Tuesday evening at the Moriah Synagogue in Manhattan to overflow audiences.

Rabbi Yosef Dov served as the Honorary President of the Agudath HaRabbonim of America, and became the rebbe and chief mentor of the Rabbinic Council of America (RCA), as well as the chief intellectual and spiritual force of Mizrachi, at whose gatherings he delivered lectures several times every year.

After the passing of his wife z’l in 1967, he began giving additional shiurim during the summer months in Boston to his students and to the RCA.

Rabbi Yosef Dov was the most influential figure associated with the spread of Torah in America, and he was singularly known as “the Rav.” 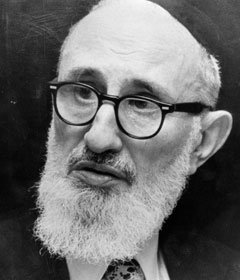